10. Who wouldn’t know Forest Gump? 1994 classics, a heartwarming movie about a man’s journey through life. If you haven’t seen this, you should probably watch it now.

9. Edward Scissorhands (1990) is a story of fragile, unrepeated love, ending with a sad Edward being stuck in solitude forever.

Edward Cumminghands is definitely less romantic, but at least you get a happy ending. You can find the review of this movie on our site as well.

8. Dawn of the Dead – a superb zombie horror movie with dead rising and killing everybody. (I feel I should also mention yet another parody of this flick, it’s Shaun of the Dead. Hillarious!!!!)

Dawn of the Head will make you rise as well, but in much more peaceful way.

Da Vinci Load… Well, that’s pretty self-explanatory, isn’t it? But you can dive even deeper and reveal secrets that are not as secret as they want you to think.

6. Harry Potter books are supposedly sold more than the Bible. No wonder some churches blame the books for encouraging children to try sorcery. But well, the world is full of morons, innit?

But if you need something more hardcore to polish your wand, there is alway Whorrey Potter.

5. The Terminator with Arnold Schwarzenegger is a sci-fi movie about a killing machine sent to the past. Everybody loves Arnold and this is one of his greatest movies.

The Penetrator is not a sci-fi movie about a fucking machine sent to… fuck.

Suicide Squirt is focused on two characters only, but you will get more action than in the original movie.

3. Indiana Jones and the Lost Ark is the evergreen adventurous movie about finding the lost Ark of the Testimony. This movie is my chlidhood, come on, admit you love it too.

Raiders of the Lost Arse is a movie about finding… well, I leave that up your imagination. Don’t expect any testimony here, but get ready for a load of testicles.

2. IT is a classic horror movie that has been recently shot again and once again became a blockbuster. The original is still slightly better (), but let’s see what the sequel will have to offer.)

1. Matrix is one of the most popular cyberpunk movies, it is the movie that showed us that there is no need to worry, because we all are just a battery floating in a tank, living in a world projected into our minds. 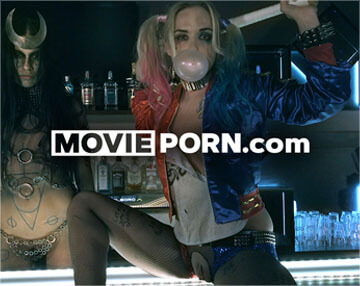